For years now, digital pathology has seen the emergence of a plethora of heterogeneous different image types designed for clinical research use or routine diagnostics. Among them one can find tissue microarrays, or TMAs, introduced in the 1990s. TMA images differ from standard histopathological samples; instead of having a whole tissue section on a single slide, we find a large number of tissue cores organized on a grid, from different patients and, possibly from different tissue types. On one TMA slide, we can find several hundred samples.

In addition to images, TMA workflows are based on complementary information related to each core on the slide. This metadata can contain the patient ID, H-score, tumor grade, or histotype. The link between the image and the core information should be handled seamlessly in the analysis workflow so as to link results to the proper input. For this purpose, Keen Eye has just released a unique automated workflow to preprocess TMA images with ease.

A TMA entity is composed of an image file, acquired from a traditional slide scanner, and its corresponding metadata file, containing information linked to each core. Current image analysis solutions consist of creating a virtual TMA grid that is superimposed on the slide image. This grid can then be moved to fit with the actual position of every core on the slide, even applying deformation or shrinkage. The analysis software then uses this grid with the TMA image and extracts each individual core. Additional manual steps might then be required to fine tune the core detection. This process often creates outputs, from the initial slide, consisting of multiple sub-images corresponding to each TMA core.

At Keen Eye we are working on the standardization of every preprocessing step in image analysis. We believe that TMA core identification and individualization are an essential part of this. Applying manual processing when dealing with a high number of images can be tedious, time-consuming  and error prone. For this reason, Keen Eye has been developing a universal and automatic input workflow for TMA images. We simplify TMA pre-processing to only a few clicks on our platform. The user simply  has to input the TMA image and its associated metadata for the preprocessing to launch. Additionally, we ensured that the core identification works properly regardless of the orientation of the metadata, by adding a button to specify the origin of the TMA grid deposit. The overall core segmentation, which takes a few seconds to be achieved, is performed simultaneously with the slide upload and the image tiling leading to a seamless operation in terms of data management.

While uploading, core segmentation and individualization are performed to populate our new TMA core navigation widget for the slide .

Our core identification pre-processing is based on an instance segmentation pipeline, followed by robust quality check modules to keep only the tissue and filter noisy detection. By estimating the core diameter and using the metadata grid, we’re also able to detect empty cores. Our solution works regardless of the image modality and can detect misplaced folded or joint cores.

TMA data is stored as a single WSI on the Keen Eye™ Platform. The instant segmentation of the core allows individual core analysis and result management.

The AI analysis workflow developed at Keen Eye can be easily performed on TMA slides. Whether you want to perform segmentation or quantification, training, validation and batch processing can be done easily. Importantly, once core identification is completed,  all metadata related to each core linked to its position is available.  Furthermore, since  the position of missing cores are also detected, it will be easy for the user to perform QC on his analysis. Moreover, if two cores are too close to each other, folded or torn, it will be possible to reject the results of the analysis for these given positions. In this way, we prevent any misinterpretation of the analysis.

First, using standard chromogenic biomarker labelling on serial section TMA slides will allow us to analyze the co-expression of biomarkers using simulated multi staining samples. As we go further in our analysis, chromogenic multiplex samples may be required. In the same manner, analysis can be performed core by core and correlated to previous or next serial section.

The understanding of a tumor micro-environment is often studied using high multiplex fluorescent images, which follows perfectly after our TMA preprocessing. Associating TMA with fluorescence multiplex staining is also very beneficial in comparing a high number of hypotheses at a relatively controlled cost.

Finally, multi-omic analysis should be performed using TMA samples. Precision medicine is not just about having the right image sample, but also about integrating proteomic, transcriptomic and genomic data. How we handle such large data is crucial in clinical research and Keen Eye is driving this new initiative. Not only do we provide a vendor neutral image analysis platform, but we are anticipating  the integration of transcriptomic and genomic data, on the same platform. 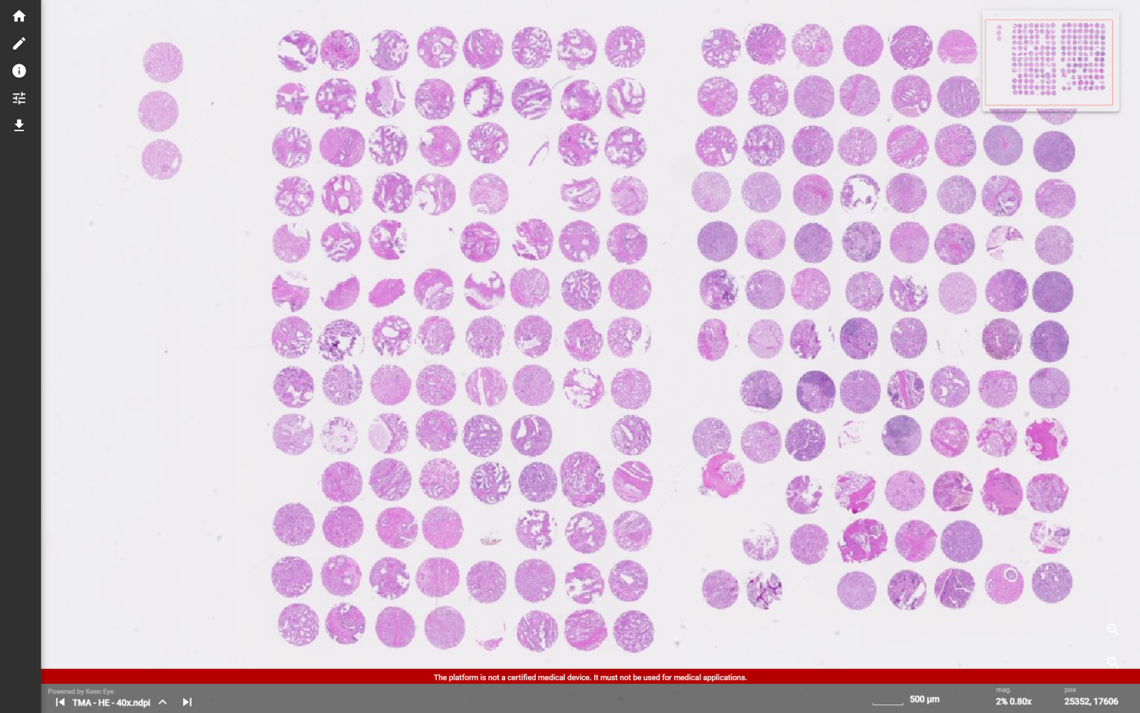